As part of MG Awareness month we at WWMG are continuing our tradition of sharing personal stories written by individuals impacted by MG. Today’s post is written by WWMG member, Chrissy Thompson.

In 2008 I married my best friend. He was, and still is, very supportive in everything I do. After a spinal fusion in 2009, a blood clot and gallbladder removal in 2010, we thought I was on my way to being healthy. I was losing weight again, my Diabetes was under control, I didn’t miss a day of work driving a school bus, that school year.

In July of 2011, my hubby Jason, and I took what we call, our little adventures, it’s where we get in our car, pick a direction, drive and see where we end up. We didn’t want to go far because in two weeks we were driving to our favorite vacation spot, Maine. I was driving and about half an hour before we stopped I noticed my right eye felt tired and irritated. I didn’t think much of it, didn’t even mention it to Jason. We stopped for lunch, and I took off my sunglasses. Jason looked at me, and the first words out of his mouth were, “Are you ok?!” “You’re not having a stroke are you?!” Perplexed I told him I felt fine, and I looked in the mirror, and saw what he did, my right eyelid was droopy. After years as a nursing assistant then a school bus driver, I know how to play it cool, but inside I was terrified. I knew it wasn’t a stroke. I rested my eyes while at lunch and everything went back to normal. I was fine the next two weeks. We drove to Maine, while there my droopy eye returned.

We came home on the first Sunday in August 2011, the next day I called my primary doctor, who thought it best I see an eye doctor. Lucky for me she had experience at the Neuro-opthamolgy department at University of Maryland. She told me, after asking me a bunch of questions about breathing, swallowing and walking, that she thought I had Myasthenia Gravis. Mya what? I went home and called the doctors she referred me to. Johns Hopkins University was the earliest appointment. I saw them about a month later, by then I couldn’t open my right eye at all, and my left eye just wandered where ever it wanted.

The doctor did a bunch of tests, did blood work and confirmed the first doctor’s verdict. I went home and researched, I was devastated. On September 20, 2011, the doctor called me and said blood work confirmed it, I had MG. I will always remember that date, it was my 35th birthday. I was started on prednisone, and CellCept a month later. 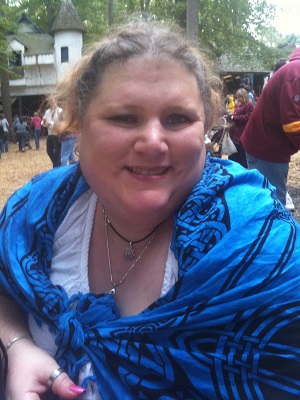 This photo was taken in Oct. 2011, about 3 weeks after I started prednisone. That was the first time I could open my eye since Aug. 2011. I was at the Maryland Renaissance Festival celebrating my 3 year wedding anniversary.

By January 2012 I progressed to generalized MG, and had to find a neurologist. He redid my blood test and my numbers were off the chart. He immediately ordered IVIG. I’ve been poked, prodded, infused, and scanned. I had to quit my job, I’ve had five doctors tell me I can’t work. I’ve put back all the weight I lost plus more, thanks to steroids. My immune system is compromised thanks to CellCept, I have handicap tags on a van, and use a power chair when I go to the store. Jason busts his butt at work and pulls overtime when he can just so I have health insurance and we can pay our bills. We can’t go on trips to Maine anymore because MG stole my job from me. Most days I struggle to get out of bed, I’m so tired. Though through it all Jason is right there to help me. Now instead of spontaneous adventures, we try to plan one, day trip a month. Someplace like Washington D.C., where I can use my power chair. 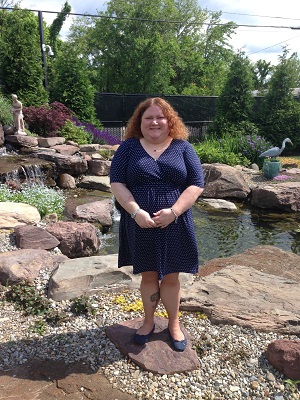 I’m still on the meds, but I’m hopeful that they will find a cure in my lifetime. I want to live without MG again.