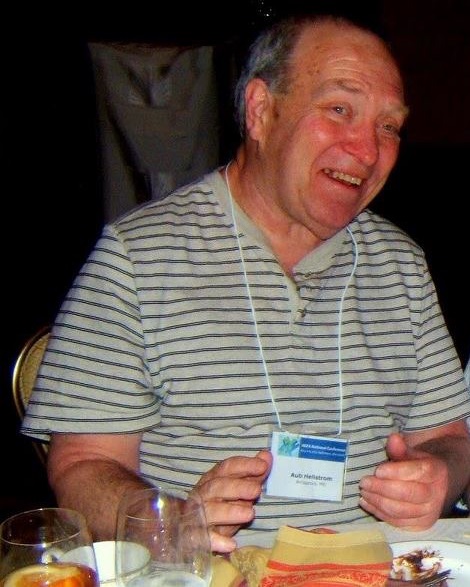 Today I learned the sad news that our friend, Aubrey Hellstrom passed away this morning at 66 years old. Aubrey had such a big personality, so full of life and laughter, that it is hard to imagine that he is no longer with us.

He fought a hard battle and he fought MG with a great attitude. He always knew how to make you laugh. Just thinking of Aubrey makes me smile.

I’m about to tell a story that I am sure some would say I shouldn’t tell, because it shows just how dumb I can be sometimes. But that’s ok, I don’t mind laughing at me, and I hope that you all can get a laugh out of it too. I think Aubrey would like that.

I first met Aubrey though some various MG groups, but at that time I didn’t know him all that well. I hadn’t met him in person and his Facebook profile photograph was he and his wife. And I had incorrectly assumed that Aubrey was a woman.  🙂

When I started WWMG, I founded it with 24 of my closest female friends from the MG community and as I added a few others, I added Aubrey.

He gently informed me that he was a man, and seemed to get a kick out of the idea of me adding him as the only male in a women’s group. He was such a great sport about my mistake. He said his name had confused people often and not to worry about it. He told me that he liked me and I was welcome to write back anytime. We chatted more after that, and got to know each other better. I loved his attitude. He was so funny.

I am sorry to say that I hadn’t talked to Aubrey in a few months, and I wasn’t aware until yesterday, that he had taken a turn for the worse. I’d been so busy with my own MG flare, running the group, and a million other things in my personal life, with my kids, etc. that I haven’t had much time for keeping in touch with friends lately. So I didn’t know he was sick until yesterday. I wish I’d known sooner and had talked to him more recently.

Even when I found out that things looked bad yesterday, I still thought he would beat it. You hear so much about how attitude plays a part in successful outcomes of those with illness, and Aubrey had such a fantastic attitude. Obviously, I know that’s not all you need to survive, but I just thought if anyone would beat this, Aubrey would. So I was shocked to learn of his passing this morning.

I am comforted by the fact he is no longer struggling. He told a friend of his that one of the times he was resuscitated during all of this, that he had an incredible experience that he was anxious to tell her about. He wanted her to write about it, so that he could share it with others. I’m sorry that we didn’t get the opportunity to hear the details of this experience, but I’m sure if Aubrey said it was incredible, it was.

My thoughts and prayers are with his family. I only had the pleasure of a casual friendship with Aubrey and I feel heartbroken about his loss, so I can only imagine what a big hole his family feels in their lives today. He was such a fun guy and he will be missed by so many.

Aubrey, this song is for you.

We will miss you, Aubrey. You set a great example of how to fight MG with attitude, flare, laughter and a lot of fun.

2 thoughts on “Rest In Peace, Friend”